Oh right, I have a blog

My horsey life has been… disorganized for the last six months. I haven’t ridden so irregularly since before I had a horse, probably. Roundup of things that have happened:

In September or so, Lacy’s mom messaged me. Lacy had been having a series of impaction colics that H and her vet believed were due to the coastal/bermuda hay down south, plus a history of ulcers. She also doesn’t handle the bugs and humidity very well, and H was spending so much on vet bills she couldn’t enjoy her horse. So, she made the heartwrenching decision that Lacy needed to find a new home in a different climate. Did I want to lease her? 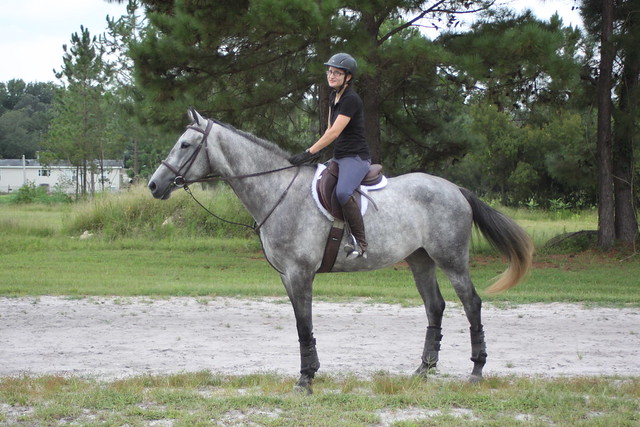 This could have been my life

Um, what? I jumped at the chance. I spent weeks checking out barns, getting quotes from shippers, researching feed, consulting with my vet about ulcer treatment, daydreaming about having a sound horse who moves like a freak and can jump and trail ride and show and has the best mind of any young horse I’ve ever seen. And I looked at my bank account and realized the numbers just don’t match up. I can’t afford a second horse. No Lacy, no bay OTTB. Not until I have been to school and have a career and a salary and a home and a truck and trailer.

I was and still am heartbroken. True, I’ve only known this horse in person for five months, but I’ve loved her since before she was born. She embodies all the things I love and admire about Pearl, and is truly the fanciest most naturally talented animal I’ve ever sat on. Unsurprisingly, H had no trouble selling her. In less than a week. She shipped to California at the end of October, to a woman who wanted to do the hunters and “promised she was not a trainer or a horse flipper.”

Ofc they slapped her in draw reins right away

Then H didn’t hear any updates on her for a while, until she was contacted by her new, new owners. Turned out she had been resold again for a “huge profit.” These owners took the time to seek out H and say they are planning on keeping her but will give her the first opportunity to buy back, have had her chiropracted and teeth done, and I’m sure she will want for nothing, and will kick ass in the show ring.

This is the horse that, in another life, I could have had for free. If circumstances were different. I know I am deeply fortunate for all the things I DO have…but that doesn’t stop me from wanting one more thing. Did you know my horse makes the fanciest freaking babies on the planet?

I swear, if I could just have one of these, I would never ask for anything ever again. Technically, I could afford a stud fee. I have a dream stallion picked out. I can get vet work done on the cheap. But I can’t afford to support another horse for all of its days, and lesson and show, and all those other things I want. So I wait, and hope that by the time I am able to do my own repro work Pearl will be around and I can do an embryo transfer. That is my biggest dream and the goal I am striving for.

2 Responses to Oh right, I have a blog